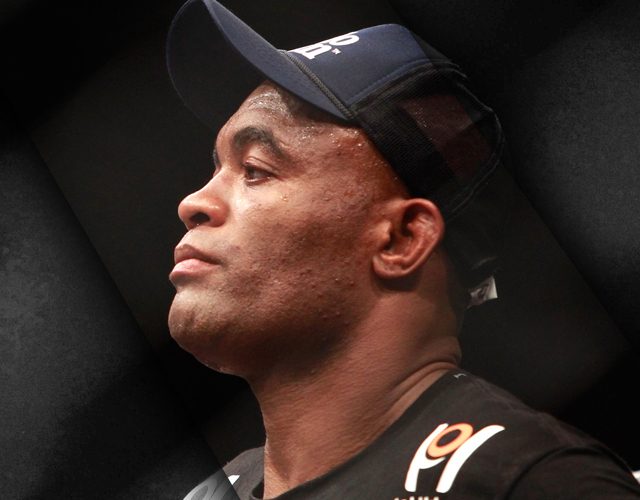 He’s either the greatest pound4pound fighter in UFC history, or he’s one of the top two, but the legendary Anderson Silva is in trouble again because of a possible USADA violation.

The Ultimate Fighting Championships has confirmed Silva is out of his UFC Shanghai main event against Kelvin Gastelum later this month based on a sample collected by USADA on October 26th.

Silva, 42, has been provisionally suspended and is now facing a full suspension from USADA, pending the adjudication and results management processes.

Silva, the former longtime UFC middleweight champion, also failed a drug test for the steroids drostanolone and androsterone in an in-competition test in relation to a fight with Nick Diaz at UFC 183 in January 2015. He was suspended one year by the Nevada Athletic Commission (NAC) for that transgression.

At the time, Silva denied he had knowingly taken any performance-enhancing drugs, telling the commission that the steroids came from a male-enhancement product from Thailand.

USADA could take into account Silva’s previous drug-test failure in deciding a sanction, despite it coming before the UFC partnered with USADA for the promotion’s anti-doping program.

In a release, the UFC said it was seeking a replacement to fight Gastelum on November 25. That card is the UFC’s first in mainland China.

Here is the entire statement as released by UFC just moments ago:

The UFC organization was notified today that the U.S. Anti-Doping Agency (USADA) has informed Anderson Silva of a potential Anti-Doping Policy violation stemming from an out-of-competition sample collected on October 26, 2017. As a result, Silva has been provisionally suspended by USADA. Due to the proximity of Silva’s upcoming scheduled bout at UFC Fight Night, Shanghai, China on November 25, 2017 against Kelvin Gastelum, Silva has been removed from the card and UFC is currently seeking a replacement.

USADA, the independent administrator of the UFC Anti-Doping Policy, will handle the results management and appropriate adjudication of this case involving Silva. Under the UFC Anti-Doping Policy, there is a full and fair legal process that is afforded to all athletes before any sanctions are imposed. Additional information will be provided at the appropriate time as the process moves forward.